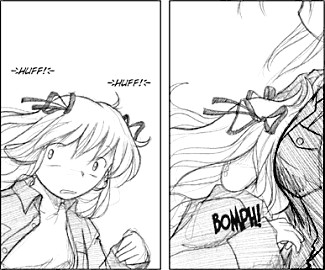 Fanservice trope, and a subtrope of Marshmallow Hell and Accidental Pervert. Someone turns to leave, is running without looking where they're going or trips over (if they are One Head Taller)... and buries their face directly into someone's feminine assets, pushing it apart with the same effect as a car's airbag deploying and absorbing the shock. Sometimes they bounce off. Sometimes they get stuck. Even if they're not stuck, it's common for them to stay in that position at least long enough to exchange initial greetings.

What differentiates this from Marshmallow Hell is:

Compare Crash-Into Hello, Thanks for the Mammary, Cry into Chest, and Living Crashpad. Subtrope of Suggestive Collision.

This is how Tsugumi first meets Meme.

This is how Tsugumi first meets Meme.