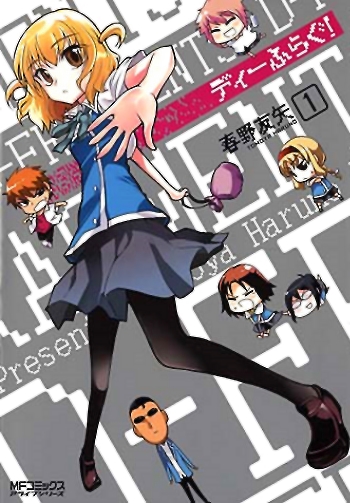 Kenji Kazama fancies himself the toughest man in Fujou Academy. Given the company he keeps, it's not too surprising everyone else sees him like that too, but he doesn't really mind. He was perfectly content spending his school days skipping classes and hanging around with his two childhood friends Yokoshima and Nagayama, who round off the so-called "Kazama Gang".

Unfortunately, in an ill-thought profile-raising exercise, he and his buddies make the mistake of visiting the room of the "Game Development Club". Made up of four really strange girls, before the day is done poor Kenji is "convinced" to join said club. While one would think it would be a blessing of sorts to be surrounded by four attractive girls, their combined eccentricities ensure that Kenji's days of relative normalcy are pretty much over.

Penned and drawn by Tomoya Haruno since 2008 and published by Media Factory's Monthly Comic Alive, to say that D-Frag! (ディーふらぐ!, or D-Fragments) is an oddball comedy is severely understating things. It has nine published volumes so far (plus a bonus one), and has spawned at least two drama CDs and an anime adaptation, which aired during the Winter 2014 Anime season.

Compare and contrast with Fujimura-kun Mates, which takes a similar situation (a delinquent meeting a strange girl) and Boke and Tsukkomi Routine comedy structure, but goes off into another direction instead (in that case, full on harem rom-com).