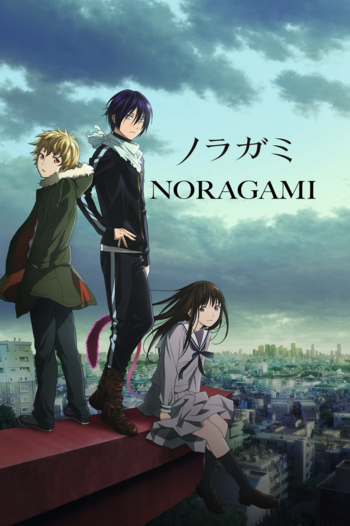 "This is the Land of the Rising Sun! Your desecration shall not be allowed! Hear me! I am the god Yato! I now lay thee waste with the Sekki, and expel thy vast defilement! I cleanse thee!...REND!"
Advertisement:

Though he lacks any kind of shrine or following, Yato dreams of becoming the most revered deity in the world. To this end, he assists people with whatever task they ask of him in exchange for five-yen. After one such excursion, his current shinki calls it quits and leaves Yato to find a more sensible god.

Despite this setback, Yato moves on to his next task of finding a missing cat. When he finally spots it, the cat is in the middle of a street. He goes to grab it, but is pushed out of the way of a speeding truck by a schoolgirl named Iki Hiyori. While Hiyori survives the hit, the incident gives her an unusual condition: whenever she falls unconscious, her soul slips out of her body. She doesn't have any control over when this happens, and this condition is most likely permanent... unless Yato can help her.

Thus, the minor god and the schoolgirl make a deal: if she can assist Yato with becoming a better god, he will find a way to fix Hiyori's condition and return her to normalcy. With the additional help of his new shinki, Yukine, Yato seems to be one step closer to his dream.

Noragami (ノラガミ, lit. Stray God) is a supernatural shōnen manga by Adachitoka. It began serialization in Monthly Shonen Magazine in 2010 and is still ongoing. Kodansha is in charge of handling the manga's English release.

The anime adaptation was handled by Studio Bones. The first season aired during the Winter 2014 season and the second, titled Noragami Aragoto, was released during the Fall 2015 season. Funimation holds the license for the anime's home video release.

Kofuku, the Goddess of Poverty, comes to visit Yato at work. Yato is not thrilled to see her to say the least.

Example of:
Slapstick Knows no Gender

Kofuku, the Goddess of Poverty, comes to visit Yato at work. Yato is not thrilled to see her to say the least.