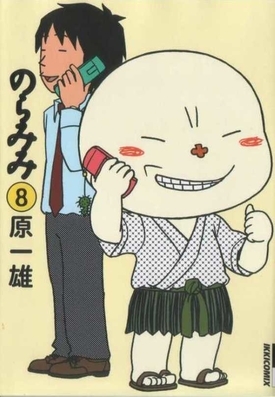 Once everyone wished for a "freeloading mascot" in their home, a loveable outsider whose only purpose was to make life fun.
This is the story of a time when society was overflowing with these mascots...
Advertisement:

Noramimi is a slice-of-life manga by Kazuo Hara, taking place in, well, see above. Mascots are strange and wonderful creatures who are drawn to children, and seek out families to live with, often enlisting the aid of mascot agencies to find the right home.

The story focuses on one in particular, the titular kaminari kozo/"apprentice priest" Noramimi, who hasn't had a kid in ten years, and so freeloads with Office #59 of the Hello Kids Mascot Agency.