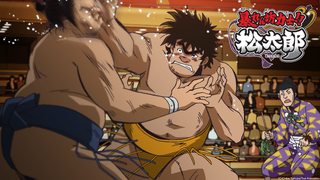 Dosukoi!
Meet Sakaguchi Matsutarou. A man who has the strength of a gorilla, and is just about as well mannered.
Advertisement:

He's going nowhere in life. He's a grown man still in middle school, mooching off his mother in his rustic mountain hometown. The only things he cares about are himself and his pretty schoolteacher, Reiko.

All that changes when he's dragged off to find a job, and crosses some men from a traveling Sumo troupe. One ass beating later, he storms off to get his revenge. Thus begins his unlikely entry into the world of Sumo Wrestling.

Notari Matsutarou ("Carefree Matsutarou") is a sports manga by Tetsuya Chiba, which was serialized from 1973 to 1998 in the seinen magazine Big Comic. It received several OVA's in the early 90's and an eventual full anime series in the Spring of 2014, and is simulcasted on Crunchyroll. The anime is called Abarenbō Rikishi!! Matsutarō ("Rowdy Wrestler Matsutaro").