Anime / Now and Then, Here and There 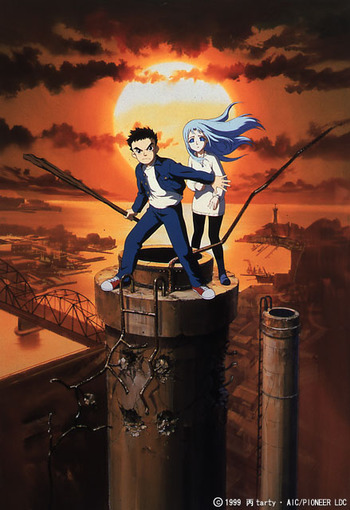 "Because ten billion years' time is so fragile, so ephemeral...it arouses such a bittersweet, almost heartbreaking fondness."
Advertisement:

WARNING: NOT for the faint of heart.

Now and Then, Here and There (a.k.a Ima, Soko ni Iru Boku or "The Me That's There Now"), originally broadcasted between October 1999 and January 2000, is a grim piece by Akitaroh Daichi, the director responsible for such manic comedies as Kodocha and Fruits Basket, and Hideyuki Kurata, former staff writer on shows such as Pretty Sammy and Excel Saga. Only this time, they put the laughs away in a lockbox and melted the key.

NTHT (as the title is often shortened) takes the old plot of being transported to another world and turns it on its head. Shu, our hero, is on his way home from kendo practice one day when he sees a strange girl sitting atop a smokestack. Curious, he goes up to meet her. The girl's name is Lala Ru and as Shu is introducing himself and talking to her, two strange machines warp in and attack them. Shu attempts to defend the girl, but he is easily brushed aside, and Lala Ru is taken. Shu renews his attack as Lala Ru calls for help, but everyone ends up getting transported back to where the machines came from.

The normal conventions of this genre decree that the alternate world be a cool, mildly dangerous place where the transportee soon hooks up with some cool friends and a protector/mentor who explains the new world and guides our hero on his great quest to rescue the damsel...

Not this time. Shu is transported to a dying desert planet orbiting a bloated sun in the process of becoming a red giant. Only the worst of humanity has survived this crucible, and Shu has been dumped alone into the heart of this hell. Shu tries to behave as the hero would, ever optimistic that good will always triumph and that if he tries hard enough he will win and restore goodness to the world. Only, things don't work that way in Hellywood, the battle fortress ruled by an insane king served by a super-efficient minion who inflicts his every demented whim on a helpless population.

Daichi pulls no punches in the thirteen episodes of this TV series and gives us no let-up. In this world, children are the targets of atrocities committed by other children. Neighboring villages are raided for vital supplies and young boys to be conscripted into the insane king Hamdo's army. Women and young girls are captured to be passed around to and raped by Hellywood soldiers as a reward for good performance in the hope that they will become pregnant and provide future soldiers and breeders. This latter fate befalls a young American girl named Sara, who is mistakenly grabbed because of her resemblance to Lala Ru. Indeed, a couple episodes in the middle of the series focus entirely on her story, not Shu's.

Daichi was influenced to create this story based on the reports coming out of Rwanda during the Genocide, and boy does it show. The anime is considered by many fans to be a masterpiece, but be warned: it is intense enough that you will probably only be able to watch it once. This one belongs on the shelf right beside Grave of the Fireflies.

Definitely not to be confused with the 1995 Coming-of-Age Story Now and Then.