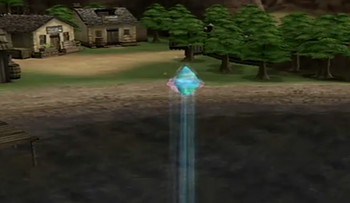 The entire lake was created by that single stone.
"There's water in a lake, water in a river,
Water in the deep blue sea.
But water in a rock—Lord! That's a miracle!
Who's got the miracle? We!"
— Anyone Can Whistle, "Miracle Song"
Advertisement:

A Rock of Limitless Water is a rock, stone, or other similar object that emits a steady stream of water from itself. Such an item is generally held as an object of reverence, either from a deity, other mystical force, or perhaps something more sinister. These items are generally desired for their otherworldly powers by heroes and villains alike.

It doesn't have to be a rock; the trope can fit any object that breaks expectations as a water source. So it shouldn't have to be a bowl, cauldron, jar, etc. Rocks are popular due to the Elemental Rock-Paper-Scissors associations; their solid, dry lifelessness contrasted with lifegiving water.

Such an item can be found across media types, occurring in film, video games, and television alike. However, due to the nature of the trope, examples will generally occur in the genres of science fiction, fantasy, and/or religious scripture. As this trope is at least as old as The Bible and Classical Mythology, it falls squarely into the realm of being Older Than Feudalism, and possibly is Older Than Dirt as well.

These items, due to their immense power, are almost always going to be a Plot Device or otherwise sought after at some point. A spring gushing from one of these is often a Healing Spring, or imbued with some other type of power. A related object is a Philosopher's Stone. Whereas a Stone of Limitless Water is generally the mark of power of a deity or magic, the Philosopher's Stone is the mark of the power of science or alchemy.