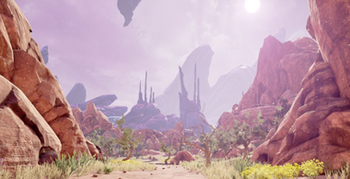 You're definitely not in Arizona anymore.
An environmental Adventure Game from Cyan Worlds, Inc., their Creator-Driven Successor to the Myst series.
Advertisement:

Like Myst, the player controls an unnamed protagonist, with the exception that the character can be male or female. You start near a campfire by a lake in a forest, where paranormal streaks of light descend and dance in the sky. One of them slows down to approach you, resembling an acorn-shaped stone. It opens up, and teleports you to a mysterious alien world.

It was released August 24, 2016 on PC with Oculus Rift compatibility released on October 31, with a Mac version forthcoming. A PS4 port was released in 2017.