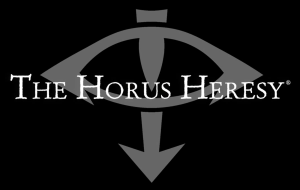 The death of the body. The death of the spirit. But above all, the death of hope.
"I never wanted this. I never wanted to unleash my legions. Together, we banished the ignorance of Old Night. But you betrayed me, you betrayed us all. You stole power from the Gods and lied to your sons. Mankind has only one chance to prosper, if you will not seize it, then I WILL. So let it be war, from the skies of Terra to the Galactic Rim. Let the seas boil, let the stars fall. Though it takes the last drop of my blood, I will see the galaxy freed once more. And if I cannot save it from your failure, Father, then let the galaxy BURN!"
—Horus Lupercal
Advertisement:

In the Backstory of the Warhammer 40,000 universe is humanity's era of hope, only just starting to dawn after the long and terrible Dark Age, before it is brought to an end by the Horus Heresy, wherein fully half of the best warriors the human race had to offer turned to worshipping dark gods and nearly wiped out the other half. The God-Emperor was permanently injured in a lethal duel with their leader, the Primarch Horus (his son, in a way), to the point that he is only kept alive by an extremely complex life support device known as the Golden Throne.

Long established in the background as being directly responsible for the shape the galaxy is in in the 41st millennium, it is the subject of the Horus Heresy series of novels and audio books, by various authors. Beyond the core conflict with the legions of Space Marines, their Primarchs, and the Emperor, the narrative splits into various sidestories fleshing out virtually every major aspect of humanity's civil war, and the events preceding it.

The series began in 2006, and as of mid-2019, it consists of 38 novels, 103 short stories and novellas (some of which are collated in 21 anthologies), 47 audio dramas (plus 4 audio drama anthologies), 2 artbooks, 2 scriptbooks, and 1 graphic novel. The Primarchs sub-series (another 15 novels, 7 short stories, and 4 audio dramas) focuses specifically on the leaders of the Space Marine Legions. From 2019, the main series has officially been ended, and new works are being published as part of The Siege of Terra sub-series, focusing on the titular conflict and serving as a capstone to the overall series (6 of 8 novels released so far, plus 2 out of an unspecified number of planned novellas). The series is one of the Black Library's most popular, with new titles regularly appearing in The New York Times bestseller list.

Advertisement:
open/close all folders
Numbered books in the series
The Siege of Terra series

Anthologies related to the book series:

open/close all folders
A-D
E-M
Euphrati Keeler: "For him, Nathaniel, because he can't. Today you and I have broken a brother's heart, and nothing will ever mend it."
N-R
S-Z