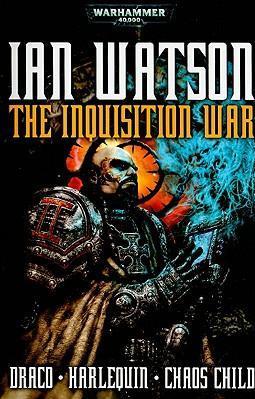 Inquisition War is a trilogy of novels — Inquisitor (later renamed Draco), Harlequin and Chaos Child — set in the Warhammer 40,000 universe, written by Ian Watson (who wrote the story for A.I.: Artificial Intelligence). The novels were written and published in the 1990s, so they utilize older lore that has since fallen out of continuity. According to an interview with Ian

, a fourth novel was planned but never got beyond the concept stage.

The trilogy revolves around Inquisitor Jaq Draco of the Ordo Malleus, and his band of acolytes, the most prominent two being Grimm the Squat and Meh'lindi, an Assassin of the Callidus Temple — both characters had previously appeared in short stories written by Ian Watson (Grimm as a side-character in the story Warped Stars and Meh'lindi as the protagonist of The Alien Beast Within), both of which appeared in the anthology book Deathwing. The series focuses on their adventures as they become caught up in a great conspiracy, one that seems to threaten the entirety of the Imperium itself.