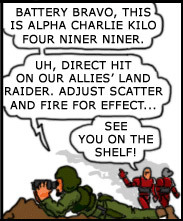 "Listen karefully and I'll explain 'ow we do things 'ere in Deff Skwadron... You shoot at it an' you miss, it's one of ourz. You hit it an' you shoot it down, then it must be one of theirs. Dead simple, see?"
— Kommanda Uzgob, Deff Skwadron
Advertisement:

Sometimes, in combat, it's hard to tell who your friends are.

In a combat zone, firing on, questioning, or fleeing your friends is common. With Due Respect may not be very respectful, as the junior cannot tell whether the character speaking to him actually is his senior officer.

Confusion deliberately induced by the villain is Let's You and Him Fight. Dressing as the Enemy can also lead to this, as can catching someone unawares (this sort of confusion can also be induced via Disguised Hostage Gambit). Unfriendly Fire often relies on this to cover up the murder. Extreme forms of Divided We Fall can lead to this. The Berserker often does not care which he's attacking, or is too caught up in the rage of battle to tell them apart. Can apply even if one character does know who is there, but has been lied to about his character, which often leads to the problems of Would Not Shoot a Good Guy.

This is often even worse before or after the actual fighting, while you are sneaking about territory that you know that the enemy is about somewhere, or into his stronghold, especially if you are a prisoner or trying to contact one. (See Alone-with-Prisoner Ploy.)

Note that the characters do not have to be in doubt ― they can just be wrong. They may (briefly) believe the approaching forces to be friendly, or they may go through all sorts of fighting and fleeing believing them to be foes. Get It Over With often reveals this trope was in play.

' (AKA "blue-on-blue engagement" among NATO forces, fratricide, or "own goal" as the Brits call it) has been a serious issue in many conflicts. This problem goes far enough back that it's responsible for battle cries, military uniforms, battle standards, and heraldry. Books have been written about the resulting investigations

. Armies have developed many innovative

it, but have never been 100% successful — partly because if you can always identify your friends, so can your enemies.

Not to be confused with the game show hosted by Kennedy or the album by Adam Ant.

Contrast with Friendly Fireproof, where you can hammer away at your teammates and not cause any damage at all.