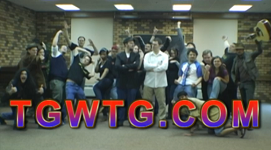 The TGWTG Year One Brawl is the Channel Awesome one-year anniversary special, which consists of a brawl between the site's most prolific contributors. The Nostalgia Critic/The Angry Video Game Nerd rivalry comes to a head, splitting the Glasses crew roughly across medium lines: reviewers of video games (plus the guy who does the Nerd's theme music) versus the other reviewers. It can be found here.

The TGWTG Year One Brawl provides examples of the following tropes: