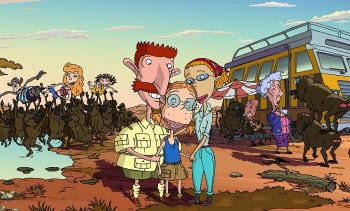 The Wild Thornberrys was a Nicktoon that ran from 1998 to 2004, produced by Klasky-Csupo of Rugrats fame, (deep breath) created by Arlene Klasky, Gabor Csupo, Steve Pepoon, David Silvermannote not to be confused with the animator of the same name who is best known for his work on The Simpsons and Stephen Sustarsic, and developed by Mark Palmer, Jeff Astrof and Mike Sikowitz. The show centers around Eliza Thornberry, an adventurous young girl who can talk to animals, an especially handy power when your parents travel the world to make Nature Documentaries. Naturally, there's a catch—she can't tell anyone she has this power, or else she loses it, and presumably, the shaman who gave it to her to begin with would be hard-pressed to give it back again. The cast is filled out by the aforementioned parents Nigel and Marianne Thornberry, the Nature Documentary's presenter and camerawoman respectively and Eliza's older sister, the deadpan and deeply-unenthusiastic- about-her-parents'-career Debbie. Also along for the ride was the deeply neurotic chimpanzee Darwin, and crazy wild jungle boy Donnie, Eliza's adopted younger brother.

The series has three films to its name, the Made-for-TV Movie The Wild Thornberrys: The Origin of Donnie (2001), and two theatrical films: The Wild Thornberrys Movie, and the Crossover movie Rugrats Go Wild!. This show has examples of some of the only non-villainous roles in Tim Curry's career - Nigel Thornberry and his father.

This show provides smashing examples of:

"Darwin! For once in your life, Just! Be! QUIET!

"Darwin! For once in your life, Just! Be! QUIET!