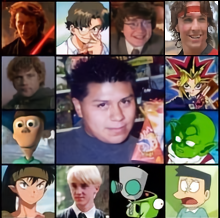 Irwin Daayán (in the middle) and some of his roles
Advertisement:

Irwin Daayán Rosenthal Sarlí (born November 9, 1978), better known as Irwin Daayán, is among the most famous LA-VA from the most recent years, and pretty much THE most popular of the newest Tenor Boys alongside Eduardo Garza. His two most common typecasting are the Nice Guy or the Badass Tenor, and he's also among the few male LA-VA's perfectly able to play roles that would usually be given to female ones.

Hilariously, he has played the two most famous Seiyas in existence.

His older sister Cynthia Eslava Sarli is a translator involved in the voice-acting industry and his brother-in-law Armando Coria is a voice actor in his own right.

No me gusta la arena, es gruesa, aspera, y rocosa. Explanation "I don't like sand. It's rough, course, and it gets everywhere."