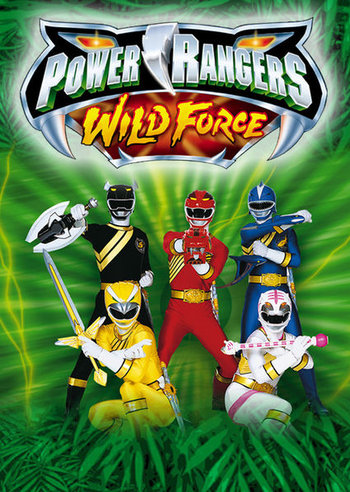 Wait, no Pink Ranger? Wasn't that a rule or something?note Okay, the White Ranger has pink accents, but still.
"Wild Access!"
— Morphing call, Power Rangers Wild Force
Power Rangers Wild Force is the 10th anniversary season of Power Rangers, based on Hyakujuu Sentai Gaoranger. Pollution is destroying the earth, and thus destroying the seals on a villainous race of demons called the Orgs. Naturally, they're coming back to take revenge and destroy humanity. Luckily, the pollution also disturbed the rest of a woman named Princess Shayla, and she has brought her home, the Animarium, to rest above the Colorado town of Turtle Cove. She also has zords and morphers; she just needs to find the owners of their corresponding animal crystals...
Advertisement:

In the meantime, Cole Evans is an orphan who found his way to South America. He's not sure how, but when he came of age, the natives who took him in explained this to him and sent him on a journey back to the U.S. to learn more about himself... and giving him the Lion crystal he was found with. He meets the other four Rangers in short order, and becomes their new leader, the Red Ranger. Along the way, he learns the story of how he became an orphan, and his fight becomes very personal.

The first season produced after the Disney buyout, Wild Force was a transitional season; the first half was aired on Fox Kids, while the second half aired on ABC Kids. Considered one of the weaker seasons, some dislike it for its lack of originality, being largely a clone of Gaoranger (some episodes are near shot for shot remakesnote Not that that's a bad thing, necessarily.); the teamup episodes are pretty much the only cool bits that weren't Gaoranger footage. This apparently stems from producer Jonathan Tzachor's pushing for the show to be more and more of a copy and pastenote Or a more faithful adaptation, depending on who you ask. of the Sentai. What draws fans to it is mostly the technical aspects—beneath the surface is a dark story of murder and war, and also, it has lots more giant robots than usual - not only that, but the individual Wild Zords are viewed by fans as being some of the coolest-looking animal mecha in the series due to their streamlined and almost naturalistic proportions. The other thing Wild Force is notable for is not one, but two excellent team-up specials.

The first one, "Reinforcements From the Future", is the traditional "Bring back last year's cast, just for kicks" episode. It's widely considered as one of the best team-up episodes in the franchise, as it doesn't just bring everyone back for a rock 'em, sock 'em battle with complete strangers — there was a serious effort towards closure of dangling plot threads of Time Force and to get as much cross-series character interaction in as possible. This included expanding on Ransik's backstory, reuniting Wes and Jen after their heartbreaking split and flirtatious behavior between the Wild Force Lancer and the Time Force Sixth Ranger. Also notable is that it was made with completely original footage; there was no Gaoranger vs. Timeranger to copy from.

The second was a 10th anniversary special where Cole was recruited for a special mission with Red Rangers from every prior incarnation.note Missing one Red Ranger, Rocky, who shared the Mighty Morphin' Power Rangers costume with Jason. They put in the red-colored Sixth Ranger from Time Force, Eric, to make up for it.

Wild Force was the end of an era on various fronts:

"I am but a humble ninja serving his one true master."

"I am but a humble ninja serving his one true master."