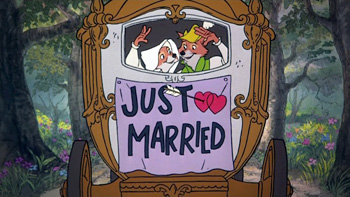 Willy Wonka: But, Charlie, don't forget what happened to the man who suddenly got everything he ever wanted.
Charlie: What happened?
Willy Wonka: He lived happily ever after.
— Willy Wonka & the Chocolate Factory
Advertisement:

So, we've had a whole love story. The main couple have passed through all the possible obstacles separating them: physical distance, a Love Triangle, a properly jealous villain, maybe even the Big Bad. Now, they are kissing each other Against the Setting Sun as the very well-known words are narrated:

"And they lived happily ever after..."

Normally, that's the end.note Note that this is an English trope. German fairy tales usually end with "Und wenn sie nicht gestorben sind, dann leben sie noch heute" - "and if they haven't died yet, they're still living today". French end with "ils se marièrent et eurent beaucoup d'enfants" — "They married and had many children", which is seen as an invitation for parodists. Hungarian stories involving romance actually account for death, apparently ending with, "Boldogan éltek, amíg meg nem haltak" - "They lived happily until they died". Russian tales takes it even further with "And they lived their lives happily and died in one day," meaning that when they did eventually die, they died together, and didn't have to live without each other.

Despite being one of The Oldest Ones in the Book, this trope is still used more frequently than you'd think. Many audiences simply want a Happy Ending because it makes them feel good. True art may be angsty, but Angst Aversion is also a fact of life. Everyone has their own favorite spot on the Sliding Scale of Idealism Versus Cynicism, and the Happily Ever After ending is meant to appeal to those who prefer the more idealistic side of things.

The original source of the Happily Ever After endings, the Fairy Tale, often dealt with the end of the evil characters, with great finality and with more details than the hero and heroine's happiness. The Wicked Stepmother arrives at Snow White's wedding, whereupon she is forced to put on red-hot iron shoes and dance until she dies, and this is an utterly typical fairy tale ending.

This ending technique is considered a classic and time honored trope, a Discredited Trope, and an Undead Horse Trope. It is often a subject to parody, and discarded for a Twist Ending. Interestingly enough, it is truly something of a Dead Unicorn Trope, as many of the older fairy tales had endings that provided An Aesop, however unfriendly.

See also True Love's Kiss, Died Happily Ever After, Babies Ever After, Dance Party Ending, The Good Guys Always Win, Wedding Finale. Contrast Downer Ending and Bittersweet Ending, the cruellest examples of which make us think they're going to be a case of this trope before yanking the rug out from under the audience. Compare Maybe Ever After, which leaves open the possibility of a happily ever after ending, but doesn't make it a certain conclusion, and Earn Your Happy Ending, in which the characters only live Happily Ever After if they're prepared to put some effort into it. In more modern works, even a straight Happily Ever After can have the rug pulled out from under it in the sequel, in which we catch up with Prince Charming and his princess and find that they're getting on each other's nerves and have to fall in love all over again.

As this is an ending trope, unmarked spoilers abound.

Not to be confused with the animated Filmation feature. Or a certain song from a certain mecha show. Or even a series of multicultural fairy tales that aired on HBO.

Rio, as per tradition of most of the known western animated films ends this way with the birds singing the song Real In Rio as well as Blu and Jewel marrying and having kids

Rio, as per tradition of most of the known western animated films ends this way with the birds singing the song Real In Rio as well as Blu and Jewel marrying and having kids