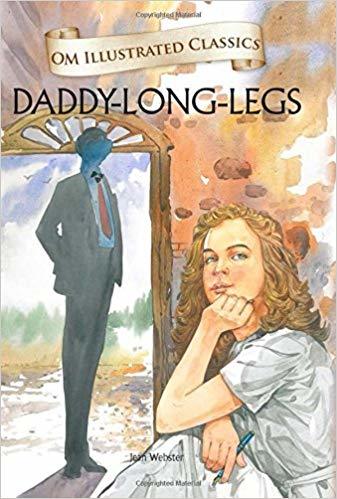 Daddy-Long-Legs, written in 1912 and set at about the same time, is Jean Webster's best-known novel (not to be confused with the webcomic of the same name).

Jerusha "Judy" Abbott is an orphan, having been raised in the unpleasant John Grier Home, which is run by a board of trustees. One of the trustees, whose name is unknown to her except through the pseudonym of 'John Smith,' is impressed by a humorous essay she writes and volunteers to send her to college to study writing. The only condition he places on the generous gift is that she write him regular letters to inform him of her progress, her activities, and her plans. Outside of the first chapter, which sets up the story, these letters form the entire novel. Judy catches one glimpse of her anonymous benefactor from behind, and her only impression of him is that he is very tall and thin; she therefore dubs him Daddy-Long-Legs, and begins to affectionately view him as the father she's never had.

"Daddy" and the reader follow Judy through four years of school and join her as she meets new people — friendly Sallie McBride, Sallie's good-natured brother Jimmie, snobbish Julia Pendleton, and Julia's handsome young uncle Jervis. She spends her summers on a charming farm, tries very hard to become a writer, and falls in love.

The book has received several film adaptations. It was made in 1919 with Mary Pickford and in 1931 with Janet Gaynor, and looser adaptations in 1935 with Shirley Temple (that one titled Curly Top) and in 1955 with Fred Astaire. The 1955 version was modified to the point where it almost qualifies for In Name Only (among other things, Judy's name is changed to Julie, possibly because the character is now French). It was adapted into two anime productions: a 1979 TV special, and, eleven years later, an installment of World Masterpiece Theater, My Daddy Long Legs (Watashi no Ashinaga Ojisan). There's also a two person musical adaptation of it that's been going since 2009.

The less-well-known sequel is Dear Enemy, published a few years later, in which Judy convinces her old college friend Sallie to take the helm of the John Grier Home and turn it into a warmer and kinder place. Sallie, reluctant at first, becomes very invested in the lives of the orphans, but frequently finds herself butting heads with the eponymous 'Enemy,' her nickname for the asylum's staff physician, Dr. Robin MacRae.

The original novel contains examples of:

The sequel, "My Dear Enemy", has the following tropes.