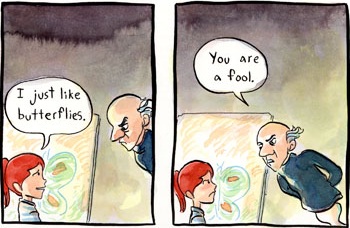 "The butterfly had an abortion as a teenager."
"Exquisite."
"It isn't gloomy, it's profound."
— Henrik Egerman, A Little Night Music
Advertisement:

The experts have spoken! The greatest stories of all time are ones full of cynicism, suffering, injustice, tragedy, and hopelessness. Yes, only the grimmest of tales can effectively explore the horrid realities of life itself; like the fragility of human existence, the crushing agony of love and regret, hopes and dreams never coming to fruition, the utter futility of happiness, and other life-defining themes, such as why mommy never really loved you. Therefore, any other story with an unambiguously Happy Ending is just a piece of cheap boring commercial tripe, or even propaganda. As for comedy shows, they're all just bourgeois garbage.

In these types of stories, nobody is really the good guy. Not even the hero. If there are otherwise any nice characters present, you can expect them to get killed off sooner or later, or alternatively, they will suffer a Fate Worse than Death. If there are characters with sympathetic viewpoints, don't expect their suffering to be the prelude to an ultimate triumph (especially when they work so hard to achieve it). No, they have to ultimately fail in the end. In fact, they've got to be traumatized for life, lose everything they held dear, give in to despair or even be killed off, along with their friends and loved ones. Heck, if there are villains around (especially hatable ones), why not let them win the day and have them get away with their crimes scot-free? Maybe even have them prosper over all the good guys while we're at it? That ought to drive home the message that life is unfair and cruel.

But in all seriousness, True Art is Angsty is an Audience Reaction when a particular work is being praised for its dark and/or cynical tone. It's also a mindset that is adopted by both cynical writers and audiences who believe that adding plenty of Angst in a work can make for compelling storytelling. However, it also has a tendency to drive away some audiences on the idealistic side, especially when the story's dark tone is too much to bear and/or isn't handled properly.

Contrast Angst Aversion (though they can overlap) and Silly Rabbit, Cynicism Is for Losers!. Too Bleak, Stopped Caring is an audience reaction voicing emphatic disagreement with the creator's notion of this trope.