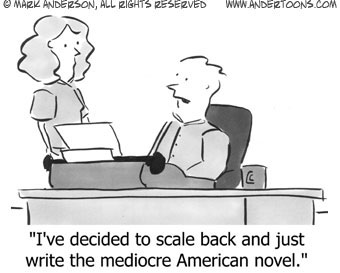 The Great American Novel is a literary concept that has yet to see fruition. It comes from an old (and sometimes snobby) notion that the United States still has to write a great literary classic that can hold its own compared to the countless iconic masterpieces that have been written in Asia and Europe.

The origins of the concept go back in history. The United States is still a relatively young country, compared to the centuries-older civilizations in Asia and Europe. This caused it to be seen as nothing but a former British colony lacking a traditional/cultural heritage and still looking for its own place and identity in the world. The USA has no great ancient epic sagas, mythologies, or fairy tales, let alone novels that are the equivalent of Asia's The Epic of Gilgamesh, Mahabharata, Romance of the Three Kingdoms, The Tale of Genji, and/or Europe's The Iliad, Nibelungenlied, Don Quixote, Paradise Lost, or War and Peace.

Naturally, this absence has been a centuries-old shame and frustration for the ever-proud and confident USA. In that regard, writing a Great American Novel has become the literary version of The American Dream. Every American novelist aspires to write it one day, and in popular culture, this has become a Running Gag and a good example of Speculative Fiction. This concept is more a cultural sensibility than anything derived from history. USA is far from being alone in having a belated literary tradition. As noted by many scholars, Russian Literature was mostly marginal until the 19th Century, when Aleksandr Pushkin arrived and Pushkin was a contemporary of Washington Irving and James Fenimore Cooper and yet the Russians don't really have any concept of a "Great Russian Novel" (even if they have many great novels in the Russian language). Likewise, the nations of South America largely had its creative and literary renaissance in the 20th Century, as did many other nations in the world and even in these cases the idea of catching up to the European canon has generally not been an essential concern.

"Genre fiction" (sci-fi, fantasy, romance, mystery, crime, horror, etc.) novels are generally excluded from consideration, though some of the titles seen below feature elements of one or more of those genres. Pure graphic novels are usually left out of the running as well.note It's been a topic of debate if graphic novels can count, since in the opinion of many organizations, they are collaborative works with artists as co-creators. Crediting graphic novels as literature would be like treating the libretto of an opera as its true author rather than its music composer.

That said, there have been a number of candidates for that badge of honor over the decades (per The Other Wiki's article on the subject

Appearances and references in popular culture: