Literature / The Red Badge of Courage 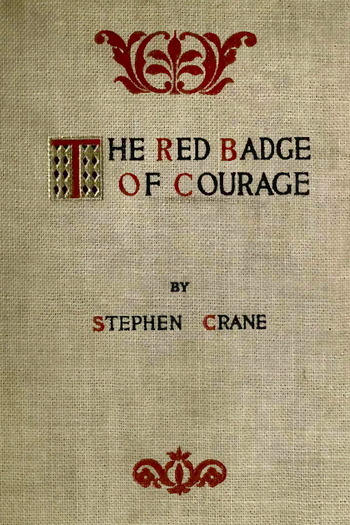 Cover of first edition
"He wished that he, too, had a wound, a red badge of courage."
Advertisement:

The Red Badge of Courage is an 1895 novel by Stephen Crane about the American Civil War, and is probably the modern Trope Codifier for War Is Hell.

Henry Fleming, a young soldier of 304th regiment, joined the Union army with wide-eyed ideas about the glory of battle and service to his country. On the eve of his first battle—per Word of God, the battle of Chancellorsville, though it's never specified in the narrative—he worries he will not have the fortitude to face combat. He does, in fact, flee from his regiment after going into combat, and after some disturbing encounters finally makes his way back. The battle isn't over, and Henry gets another chance to prove his courage.

Made into a film in 1951 starring Audie Murphy, written and directed by John Huston. Famous as a Troubled Production in which MGM took the film from Huston and whacked out a good 50 minutes or so, leaving it with only a 69-minute run time. Given that in the film Henry is seen writing a letter dated September 10, 1862, the battle in the movie would appear to be Antietam. The novel was also adapted as a first-season episode of the PBS children's series Wishbone, "A Terrified Terrier", in 1995.