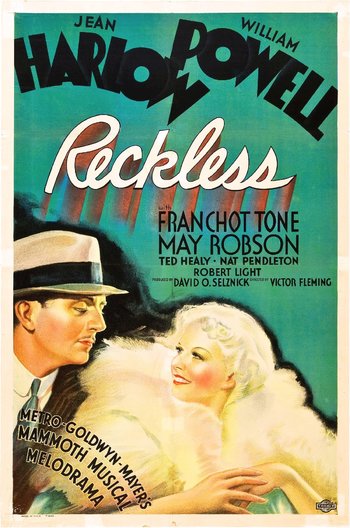 Reckless is a 1935 film directed by Victor Fleming.

Mona Leslie (Jean Harlow) is a big musical stage star. Old family friend Ned Riley (William Powell), a sports promoter and gambler, carries a torch for Mona, but he Cannot Spit It Out.

So Ned is beaten to the punch by Bob Harrison Jr. (Franchot Tone), a big fan of Mona's. Bob is a huge fan of Mona's and also filthy rich from a filthy rich Old Money family, which is why he can afford to rent out a theater and put on a performance starring Mona, in a show with an audience of one, himself. Bob's puppy-dog adoration and tons of money lead to him and Mona getting married, much to Ned's disappointment.

Unfortunately, very soon after getting married Bob starts to have buyer's remorse. His starchy upper-crust family strongly disapproves of him marrying a showgirl. Also, Bob's infatuation with Mona and their whirlwind romance caused Bob to forget Jo Russell, the lovely young society lady he was already engaged to. Mona for her part is deeply hurt by the Harrisons' dislike for her and by Bob's attitude. Soon sorrow and regret lead to tragedy.

Two actors on the cusp of stardom appear in small roles. Rosalind Russell pops up in the last third of the film as Jo Russell. A young Mickey Rooney has an even smaller part (two scenes) as a former Street Urchin who with Ned's help has gotten a small sidewalk concession stand.