Film / The Farmer Takes a Wife 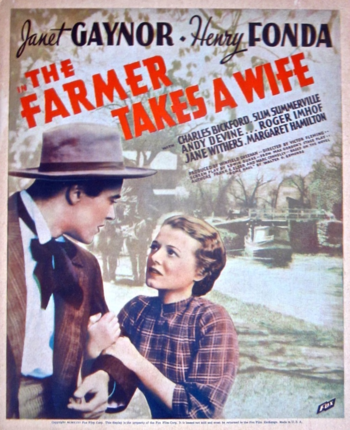 The Farmer Takes a Wife is a 1935 Romantic Comedy directed by Victor Fleming. It stars Janet Gaynor and Henry Fonda, the latter in his screen debut.
Advertisement:

In nineteenth-century upstate New York, Molly Larkins (Gaynor) works as a cook for Erie Canal driver Jotham Klore (Charles Bickford). Meanwhile, Dan Harrow (Fonda) is becoming a driver too, although he's only planning to stick around until he earns enough money to buy a farm. This outrages Molly, who thinks life on the canal is ideal. But despite their differing views on the canal, Dan and Molly find themselves attracted to each other.