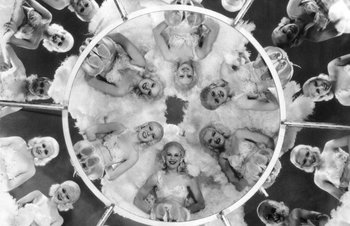 Fashions of 1934 is a musical comedy film from, yes, 1934, directed by William Dieterle.

William Powell is Sherwood Nash, a rather shady businessman who, at the very start of the movie, is watching people repossess the furniture in his failed investment firm. (It was 1934.). As he is leaving his shuttered office, he chats up ambitious but frustrated fashion designer Lynn Mason (Bette Davis). One look at Lynn's sketchbook and Nash gets an idea. Soon, he is running a scam in which he copies the latest fashions coming over on the boats from Europe, and sells cheap knockoffs in department stores.

Incensed New York fashion store owners threaten Nash with arrest, but he points out that they'd be better off enlisting him to steal for them. So Nash and a reluctant Lynn are off to Paris to rip off the elite designers. They get caught doing that, however, so Nash comes up with still a different scam: Lynn will forge the works of leading fashion designers, coming up with her own drawings but signing the names of better-known people.

Made toward the end of The Pre-Code Era, the film basically uses its plot as an excuse for sex jokes, fanservice, and a Busby Berkeley Number choreographed by Busby Berkeley himself. The only time William Powell and Bette Davis starred in a film together, mainly because right after making this movie Powell left Warner Bros. for MGM.