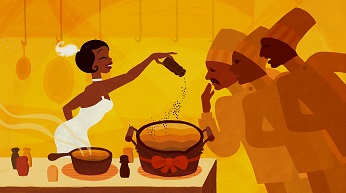 And in a fancy dress too.
"Is this the kind of wife you want, Ben? Not someone to help you, not a wife to cook and sew and cry and need, but this kind. Selfish, vain, useless. Is this what you really want?"
— Eve, Star Trek: The Original Series, "Mudd's Women"
Advertisement:

If a female character is feminine, she will be able to cook. If she isn't, then any and all attempts to cook will end in failure or poison the consumer. Thus the Girly Girl will be a better cook than the Tomboy.

By feminine we mean traditional domestically-focused wife-like roles. Being sexy isn't enough to qualify. You can also lose femininity by becoming overly childish and cute. We are talking about a traditionalist grown woman femininity here; The Wife of The Three Faces of Eve.

Keep in mind that this trope refers to home cooking, not professional cookery. (Although working in a restaurant may still be counted as one of the Acceptable Feminine Goals and Traits depending on how it's presented.) Younger tropers might be surprised to learn that before the 1980s, women were generally not allowed to work as professional chefs.note Famous female chefs do seem to have worked professionally pre-1980, whether in their own eateries or publicly. The excuse usually given was that the work was "too physically hard" for women, but in reality the common belief was that although a woman could make an adequate home cook, she could never be a real chef, because being a chef took a certain genius that no woman could possibly ever, ever have. The resistance to women working as professional chefs was so strong that some women who tried ended up having to leave the profession to protect themselves from sexual harassment and violence. Thus Colette in Ratatouille can cook and be a fiery feminist heroine at the same time - as she points out, she has to be a fiery cook in order to become a chef at all.

This trope is fairly recent, as before the arrival of electric and gas ranges (and of packaged meat) cookery was dirty, hard work that if anything sharply detracted from a woman’s perceived femininity, especially in a time when ‘true’ femininity was considered to be possessed only by the genteel. A proper lady living in the 18th or 19th century might make preserves or distill perfumes or medicines - and would have a stillroom in which to do so - but (as Mrs. Bennet rightly points out in Pride & Prejudice) would not be caught dead even so much as walking into her own kitchen, let alone cooking in it.

Compare the male equivalent Manly Men Can Hunt for traditionally male activities in which modern successful men lose the ability to perform manly abilities as a function of their "sacrifices" for success. Fishing, car repair, hunting, plumbing, carpentry, etc.

Compare also Harp of Femininity, an alternative and somewhat more refined way to emphasize a woman's femininity. Also compare Textile Work Is Feminine, which is similar but has fallen more victim to the Industrial Revolution. Also see Through His Stomach for one use a feminine woman can put it to — whether in a romantic or maternal situation.

Not to be confused with Stay in the Kitchen, which, despite its name, isn't exactly related to this trope, although they can overlap. Inverted with Dads Can't Cook or Real Men Cook, depending on your perspective.