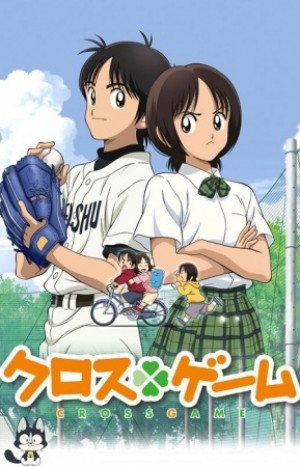 Cross Game is a romantic comedy baseball manga series by Mitsuru Adachi, which ran from 2005-10. Although it is better described as a Coming-of-Age Story: All about life. Death. And baseball! Think The Wonder Years plus The Natural. (If you are too young to remember The Wonder Years replace it with Boy Meets World). A year-long anime adaptation aired starting in 2009, with the first episode receiving excellent reviews, both in and out of Japan. Viz has licensed both the manga (volumes collecting two Japanese volumes each, with three in the first, started coming out in late 2010) and anime (weekly episodes began streaming from their website in May 2010).

Fifth-grader Kō Kitamura has a girlfriend, Wakaba Tsukishima, who in his words is "the cutest girl in 5th grade." He didn't ask for this girlfriend. In fact he'll insist he doesn't have one. Wakaba, however, insists otherwise, casually ordering him around, instructing him to take her to her swimming class on his bike, and giving him a list of what birthday present he is to give her each year for the next ten years. Kō grumbles a bit occasionally, but he doesn't really resist — Wakaba has him wrapped around her little finger, and he is never getting free. They were born on the same day in the same hospital, and everyone agrees they are destined to be together.

Everyone except Aoba Tsukishima, that is. One year younger than Wakaba, Aoba adores her older sister, and is quite jealous of Kō, and the attention Wakaba showers on him. She even declares that she hates him. However, because they are so close together in age, the three often end up doing things together, even though Aoba sometimes feels like a third wheel. Unlike Kō, who is pretty directionless without Wakaba telling him what to do, Aoba is dedicated to becoming an excellent baseball pitcher.

Then the end of the first volume happens (equivalent to the first episode of the anime), with Wakaba's death, by drowning in a river during summer camp. Fast-forward four years, and Kō and the Tsukishima family are still dealing with the repercussions. As Kō enters high school, he joins the high school baseball team. As he begins to grow up he finds that getting older isn't easy.

More realistic than most sports anime, the baseball games are slow and feel like real games. The emotions that the characters deal with are strong, but very real and understandable.