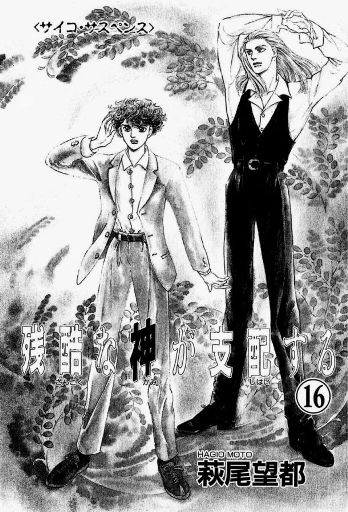 A Cruel God Reigns (Zankoku na Kami ga Shihai Suru) is a josei Boy's Love manga by Moto Hagio, which ran in Petit Flower from 1993 to 2001.

Jeremy is a sensitive teenager who is happy for his mother when she remarries. However, the sweet-talking man who is his new stepfather turns out to be a serpent in disguise — he’s a sadist and a pedophile, and it isn’t long before he makes Jeremy his target. After months of horrific, systematic abuse, Jeremy’s mind becomes unstable and his thoughts turn vicious. He decides to murder his stepfather in order to get rid of him — but the plan goes awry.

Shocked and wracked by guilt, Jeremy reacts in a way that seems strange to the average onlooker. His brittle and bizarre behavior isn’t just that of a grieving son. This is when Ian, the free-spirited son of Jeremy’s stepfather, begins to suspect Jeremy of murder. He finds several clues that tie Jeremy to the crime, but in unearthing them, Ian also discovers the fact that Jeremy was abused.

What should Ian do with his evidence? Caught in a moral dilemma — between punishing a criminal and atoning for his father’s sins — Ian begins to be haunted by lust for Jeremy. Is it lust, or is it love? Ian wonders whether he shares his father’s proclivities, and despite his best efforts, he is drawn into a passionate and painful relationship with Jeremy.

In seventeen intense volumes, A Cruel God Reigns traces both Jeremy’s and Ian’s journeys towards redemption. The story-telling is rich and unique, and the art is breathtaking. In 1997 Hagio was awarded the Osamu Tezuka Culture Excellence Award for A Cruel God Reigns. To this day, A Cruel God Reigns remains one of the most powerful BL epics ever written.

Tropes for this Manga include: