Manga / The Heart of Thomas 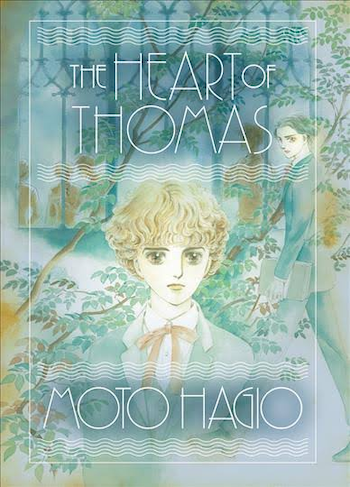 The Heart of Thomas (Thomas no Shinzou) is one of the earliest Boys' Love manga, written and illustrated by Moto Hagio (a contemporary and friend of Keiko Takemiya, together with whom she is known as a pioneer of the genre). The manga was serialized in Shuukan Shoujo Comic from May 5 to December 22, 1974. Despite its short run, The Heart of Thomas had a profound impact on shoujo manga as a medium; its stylistic and narrative trademarks would be adopted by other shoujo manga and become standard tropes of shoujo from that point on.

The story starts with a letter from the eponymous Thomas Werner to the young man he loves, confessing his feelings and the desire to have a place in his beloved's heart. Juli Bauernfeind, to whom the letter was addressed, appears to be indifferent to it all. However, his world is shaken further by New Transfer Student Erich Frühling, a boy with looks identical to Thomas. The two clash with each other almost immediately and many hidden problems are revealed.

The manga eventually received an English translation, released in 2013 by Fantagraphics. The translation is by Rachel Thorn, a veteran shoujo manga translator who has written several articles on boys-love manga.

The Heart of Thomas presents examples of: