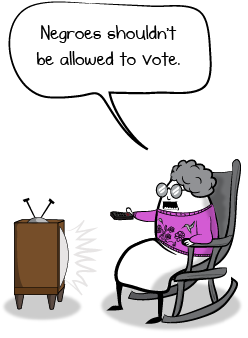 Racism in a regular character: depressing. Racism in a grandma: hilarious.

This is a situation where the old woman who you expect to be a cookie-making nice old lady starts unexpectedly spouting obscenely offensive comments. This is usually Played for Laughs. This can apply to any elderly character and any kind of political incorrectness, although usually it really is racism by a grandma.

Usually the humor derives from the irony of an elderly character using language one would normally associate with a fiery young skinhead. However, it can also be Truth in Television for 21st century demographics. Although obviously not all old people are bigots, old people are more likely to subscribe to pre-civil rights cultural beliefs and are more likely to say inappropriate thoughts out loud

. However, this tends to be counterbalanced by the fact that they were raised in a "more polite" era than ours. (More polite, not "polite".) Take Archie Bunker, for instance, who took care to substitute "spade" for "nigger", "hebe" for "kike", etc. It can also be accidental if the grandma is using what was an acceptable term when she grew up, without being aware that it is now considered derogatory, (e.g., in the article linked earlier in this paragraph, the author recounts her negative feelings when an elderly man referred to someone as "colored" — but this was in fact the politest term for black people when the man was likely raised, and the chosen way for most black people to describe themselves back then, like the NAACP.) Furthermore, elderly people whose views about minorities really did change with the times may suddenly begin spouting offensive beliefs from their youths if they're suffering from senile dementia.

While it's tempting to think that this will soon become a Dead Horse Trope, now that the youngest people who came of age before the mid-1960s are now in their seventies and the average life span for most Westerners is about 80, there is evidence that quite a few people actually become bigoted with age. note Bitterness about growing old can cause certain people to develop a hostile attitude against most things or even everything in the modern world — even of things that their generation helped to bring about in the first place. For example, a poll (albeit a dubious one, since it took into account a very small sampling of the U.S. population) suggested that a surprisingly large number of Baby Boomers (now in their fifties at the youngest) are now uncomfortable with interracial marriage, despite the fact that most were children when Loving v. Virginia was decided. However, a legal case does not indicate popular support. At the time of Loving v. Virginia, interracial marriage was overwhelmingly opposed by Americans, and it wasn't until the late Nineties when it finally gained majority support.

In fiction, this character is usually intended for comedy and will tend to be Affably Evil (or, at worst, Faux Affably Evil or a petty dog-kicker). However, this can also be Played for Horror, with some of them being able to perpetrate genocide just as adroitly as their younger counterparts. And even a racist too old to hurt anyone themselves can still vote for people who share their views.