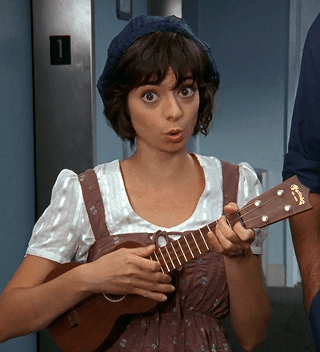 Do your homework with a fork
And eat your Froot Loops in the dark
And bring your Etch-a-Sketch to work
And play your ukulele
— Amanda Palmer, "Ukulele Anthem"
Advertisement:

Once associated with Polynesian music (though it was originally a Portuguese variant on the guitar), and with 1920s jazz, since the 1990s the ukulele has since become associated with quirky young people. Most examples are women, with males preferring acoustic guitars (and, overall, singing more sentimental songs). Their youthfulness and weirdness is accentuated by the fact they like such an obscure, light sounding instrument as the ukulele.

The character doesn't necessarily even have to play the ukulele. They can just have a ukulele-themed leitmotif.

This became a Dead Horse Trope in the 2010s due to overuse. Ukuleles in relation to quirky characters are more often mocked than played straight.

Compare/contrast Polka Dork. The male variant of this is Girls Like Musicians. It may be her Signature Instrument.

At the end of "Phantasm 3 Ukulele Jam!", he goes back to pretending he knows how to play it, strumming it in various absurd and incorrect ways.

At the end of "Phantasm 3 Ukulele Jam!", he goes back to pretending he knows how to play it, strumming it in various absurd and incorrect ways.