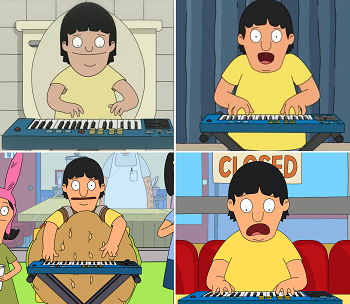 This trope is about the one (or two, or several) musical instrument/s a character loves to play and keep around. Maybe it was given to them by someone they love, maybe they've had it since they were small or since they got into music, or maybe they just think it looks/sounds cool, but nevertheless, it's significantly theirs.
Advertisement:

Quite often, the instrument looks unique to set it apart (maybe its colour matches the person's clothes or has their initials on it or something), but not always.

It may also be a #1 Dime or an Instrument of Murder. If characters have Signature Instruments, it's a good bet they'll play them in an Autobots, Rock Out! scene. See also Quirky Ukulele, Triangles Are the Worst Instrument and Iconic Item. Sometimes Truth in Television as many bands have their own customised drums and/or guitar.

Weapon of Choice is the weapon version of this trope, and the two can overlap into Instrument of Murder or Instrumental Weapon. Compare Signature Device.