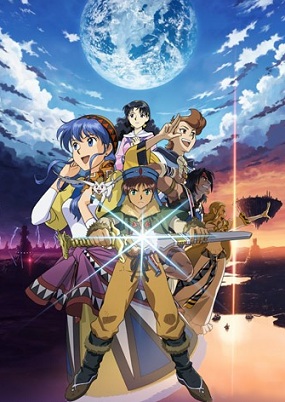 The first game in the Game Arts-developed Lunar series of console role-playing games. The game has gotten multiple remakes and/or enhanced re-releases over the years on multiple platforms. The titles are:
Advertisement:

All five games tell the story of a young man named Alex who sets out on a classic hero's journey with all the trimmings. The details vary a bit from version to version, but have the same underlying structure: the protagonist, Alex, admires a famous hero named Dragonmaster Dyne who died 15 years prior. So, when a dragon offers him the call to adventure, he jumps at it, seeing it as an opportunity to follow in his idol's footsteps. His journey gets him mixed up in a conflict between the forces of good and a villain called the Magic Emperor, with the fate of the world at stake. By facing this foe, Alex gains the wherewithal to make all his dreams come true. He goes on a grand adventure, prevails against the baddie when it seems like all hope is lost, gets the girl, and saves the world.

The plot is traditional (and thus predictable) and the gameplay is much the same — anyone who has played an Eastern RPG will be perfectly at home with Lunar. To be as successful as it's been, other elements have to seize the player's interest. In this case, those are the writing and the music. The blend of engaging characters, the colorful writing full of shout outs and fourth wall breaking humor, and the acclaimed soundtrack (two of them, as Lunar: The Silver Star's music is distinct from the others) are what has given Lunar its staying power.

Lunar: The Silver Star and its remakes provides examples of: