Video Game / The Lord of the Rings: Aragorn's Quest 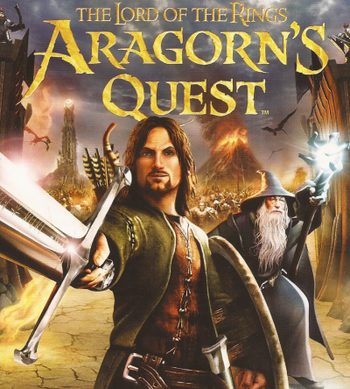 A day may come when the courage of Men fails...but it is not this day! This day we fight!
Sam Gamgee: Didn't I ever tell you the whole story of Strider?
Advertisement:

The Lord of the Rings: Aragorn's Quest is a video game released in 2010 that retells the events of Peter Jackson's film trilogy from the perspective of one character, Aragorn. It was released on the Wii, PlayStation 3, PlayStation 2, PlayStation Portable and Nintendo DS.

The game is set after the events of the trilogy, when the hobbits lived in peace and Samwise Gamgee raised a family of his own after marrying Rosie, naming his son Frodo. When word gets out that Aragorn is visiting the Shire for a celebration, Sam decides to gather young hobbits to retell his adventures with Frodo to them so that a new generation would know the story about the Lord of the Rings.

The Wii and PlayStation 3 versions of Aragorn's Quest developed by Headstrong Games, contain examples of the following tropes: