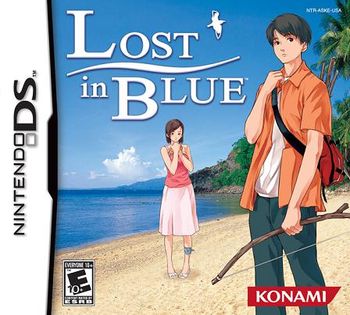 You see that girl standing there looking helpless? That's because she is.
Advertisement:

A series of Survival Sandbox games by Konami, for the Nintendo DS and Wii, consisting of the original Lost in Blue in 2005, 2007's Lost in Blue 2 and finally, 2008's Lost in Blue 3 and Lost in Blue: Shipwrecked. These games are only thematically related to each other. In the US, the Lost in Blue series is treated as a Spiritual Successor to the earlier Game Boy Color game series Survival Kids, while in Japan, the series has been continuously branded with the Survival Kids name and there's no true difference between them.

The premise of the games is generally that you are stranded on an island with different areas to explore. You have meters that cover different human bodily functions, and you need to find food and water in order to survive, and eventually your goal is to escape from the island. The games usually feature a male character and a female character that in the different games, can range anywhere on the Sliding Scale of Gender Inequality from The Load, The Chick, to Action Girl.