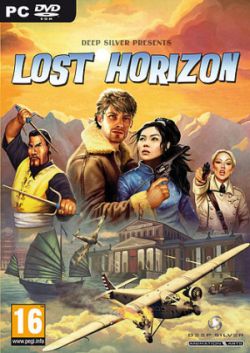 Lost Horizon is a 2010 Adventure Game made by Animation Arts and Deep Silver.
Advertisement:

The game takes place in 1936, and deals with the search for Shambala, a utopian place mentioned in certain Buddhist traditions. The plot begins when some Nazis of the paranormal research type attack a monastery in Tibet looking for a portal leading to Shambala. A British officer, Richard Weston, just happens to be present, and escapes into the portal. The British authorities in Hong Kong are left wondering what happened to him, and turn to one of his old friends to go and find him. This is Fenton Paddock, a discharged officer who now makes a living as a pilot and smuggler. He agrees to go look for his friend, picking up his once-and-future love interest named Kim along the way. The Nazis are after some of the same clues he is - they're trying to get into Shambala for its power, while he's trying to find his friend. In the course of it, Fenton passes through Hong Kong, Tibet, Morocco, Germany, and India. In the end, Fenton, Kim, and the Nazis all make it into Shambala, where the Nazis are thwarted just as they try to seize control of its power.

Players spend most of the game controlling Fenton, the exceptions being the prologue (where they control Richard Weston) and assorted portions in the remainder of the game when they can switch between Fenton and another character (either Weston or Kim).

(There's a 1933 book with the same title as this which also deals with expeditions to a hidden Himalayan paradise, but this game is not an adaptation of it (or the 1937 film based on it). Aside from sharing the concept of a secret magical place in Tibet, there's no significant similarity at all, whether in plot, characters, theme, or style.)

A sequel was released in October 2015.