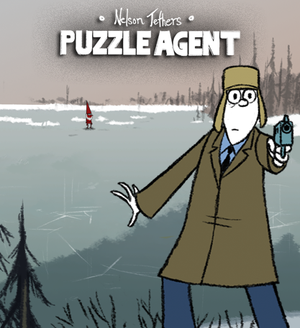 Nelson Tethers: Puzzle Agent is an adventure/puzzle game by Telltale Games, in collaboration with Graham Annable. It is the first game to come out of Telltale's pilot project and is based on Graham's Grickle series of short Flash cartoons

Agent Nelson Tethers (voiced by Doug Boyd) is the only employee in the FBI's ignored Puzzle Research Division. At the start of the game, he is given his first field assignment in years: The factory that produces the erasers used by the White House has mysteriously stopped production and any attempt to contact them have been replied with puzzles. Tethers is sent to the small town of Scoggins, Minnesota, the location of the factory, to investigate what happened. When he arrives, he finds that the townsfolk are quite obsessed with puzzles. He also discovers that the factory is sealed with a strange lock and that there was some sort of "accident" involving an explosion in the factory. The factory's foreman, Isaac Davner, has also disappeared after the accident. During the course of the investigation, Tethers encounters strange red gnome-like creatures who hinder his progress. Who or what are these strange creatures? Why are they doing all this? And why are some of the townsfolk acting so suspicious?

A sequel, Puzzle Agent 2, was released exactly one year later on June 30, 2011. Though the case is officially closed with the eraser factory back up and running, Isaac Davner is still missing and there are still a lot of unanswered questions. Nelson decides to take some vacation time and head back to Scoggins to get to the bottom of things, only to find that the mysteries go much deeper than anyone had thought...