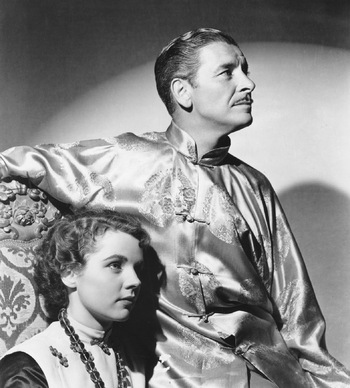 Lost Horizon is a 1937 film based on the novel of the same name by British author James Hilton (of Goodbye, Mr. Chips fame), directed by Frank Capra and starring Ronald Colman.

British diplomat, soldier, adventurer, writer, and proto-Indiana Jones hero Robert Conway (Colman) is sent off into a remote part of China to rescue a group of westerners caught in a war zone. He and his brother George (John Howard) rescue a motley group that includes paleontologist Alexander Lovett (Edward Everett Horton), swindler Henry Barnard (Thomas Mitchell), and Gloria (Isabel Jewell), a hooker with an Incurable Cough of Death. However, Conway and his charges soon discover that they have been hijacked by a person pretending to be their pilot. The plane runs out of fuel and crashes deep in the Himalayas along the border of China and Tibet. The dying pilot's last words indicate that there is a lamasery in the nearby valley of Shangri-La, and that they can find help there. Conway and the rest of the passengers go to the lamasery, where they uncover a mystery.

When the negative of the 1937 film was restored in The '70s, it was decayed so badly that seven minutes could not be salvaged. However, an intact soundtrack was found. The film as it exists today uses still pictures along with dialogue to illustrate those seven minutes.

The 1937 film provides examples of:

The 1973 film adds the following tropes: