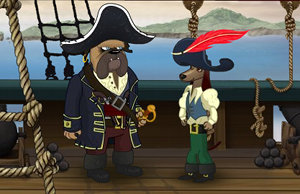 Ever since Monkey Island, pirates and Adventure Games go together like vampires and teenage-girl fiction. Just months after Ghost Pirates of Vooju Island, we have yet another Point-and-Click games with a pirate theme — but this time, the scurvy dogs really have bite.

Meet Gaius James Rover, a dachshund who aspires to follow his late father's footsteps as a circus clown. He accidentally creates a popular blend of rum that he names, in honor of his father, "Jolly Rover". When sailing with a shipment of Jolly Rover to Governor DeSilver of Groggy Island, James is captured by bulldog pirate Captain Howell. James reports the incident to Governor DeSilver, but is shocked to see Howell entering the Governor's office, delivering the very shipment of Jolly Rover that he stole from James! DeSilver rewards Howell, but takes James to task for failing to honor his contract — not only has DeSilver refused to take his case, he now owes DeSilver money!

Something is mangy here, and James's subsequent investigations will dig up old bones that refuse to be laid to rest.

Two things are notable about this modest but competent Point-and-Click adventure, designed by Andrew Goulding as the first release of Brawsome Games: first, it brings back the "score" meter of old Sierra titles (but without the sadism associated with Sierra). Second, the game has a few tricks to make you play through it more than once.