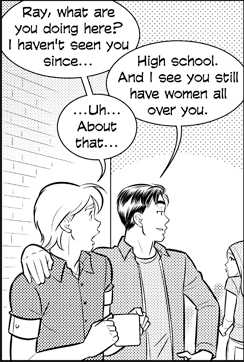 Someone knocks on the door of your overly spacious apartment. It's an Old Friend from childhood, or an old college roommate — someone you knew long ago but lost touch. Maybe he just stopped to say hi, or maybe he needs to bunk down at your place, or maybe he wants to share a holiday with you. He may be more wild and crazy than you. You may be reluctant to join his hijinks at first, but now that he's around, you start joining in.

This can be the premise of a work or a series. Think The Odd Couple or Supernatural.

If the Old Friend messing with your life isn't part of the premise, then Status Quo Is God will eventually have your friend leave, or you give him the boot. You will likely be unhappy; there's more than even odds he will be, too. The visit of the Old Friend will leave you wondering how little he's changed and how much you have. Or, on occasion, vice versa.

Toxic Friend Influence is when this friendship is really bad for you; expect An Aesop about leaving the past behind you, often with the main character recalling that this is why they lost touch in the first place.

In sufficiently recent works, the Old Friend is likely to be a New-Age Retro Hippie.

Compare Beleaguered Childhood Friend. Not to be confused with I Want You to Meet an Old Friend of Mine, but can overlap. Contrast Old Flame Fizzle, discovering that the friendship (instead of the love) is gone.