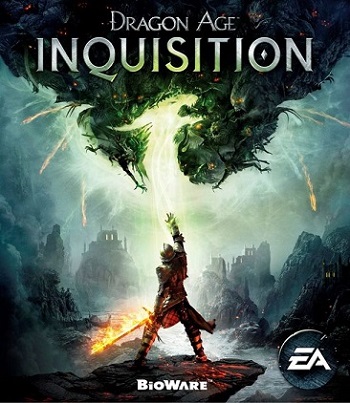 Conspiracies. Civil War. A demonic invasion from beyond the Veil. And only you can stop them.
Just another day in Thedas.note And I call your blood motifs and raise you a demon motif!
"Faith lies in ashes. Our fragile alliances crumble to dust as this world is torn asunder. Darkness closes in. Will you stand against it, or lead this world to its bitter end?"
—Morrigan
Advertisement:

The third installment of the Dragon Age series by BioWare, which was released on November 18th, 2014 in North America and November 21st, 2014 in Europe for PC, Xbox 360, PS3, PS4 and Xbox One. The game takes place across the lands of the Orlesian Empire (including the Dales) and Ferelden, after the conclusion of Asunder, The Masked Empire and the Dragon Age II epilogue in 9:40 Dragon.

Instead of playing as the Warden or Hawke, the player takes control of a new protagonist, the Inquisitor. Similar to Dragon Age: Origins, players can customize this hero's class, gender, and race (human, elf, dwarf, or Qunari). After a cataclysmic event plunges Thedas into turmoil, the Sole Survivor of said event is tasked with rebuilding the ancient Inquisitionnote originally an Anti-Magical Faction from the Divine Age, which merged with the Chantry nine centuries ago and eventually split into the now-rogue Templar Order and the Seekers of Truth and leading it to restore order and to hunt down the agents of chaos, getting involved in the Mage-Templar war and the Orlesian Civil war along the way.

Inquisition also features a multiplayer mode where up to four players can take control of agents of the Inquisition in randomly generated dungeons.

Spoilers for previous entries in the series will be UNMARKED.

Bare your blade and raise it high.
Feedback

The Inquisitor has had it with Thedas being in a state of constant peril.

The Inquisitor has had it with Thedas being in a state of constant peril.