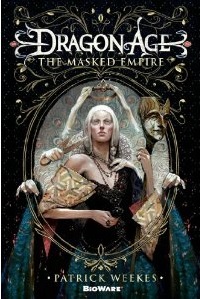 The Masked Empire is the fourth Dragon Age novel, released on April 8, 2014.

The book was scribed by Bioware writer Patrick Weekesnote : Weekes previously wrote Jack, Tali, Kasumi, and Mordin's storylines across the Mass Effect series, as well as the Rannoch and Tuchanka sections of Mass Effect 3 and takes place in Orlais some time after Dragon Age II and concurrently with Asunder.

The novel centres around the events leading to the Orlesian Civil War with Empress Celene I struggling to hold on to her throne whilst Duke Gaspard, the commander of the Orlesian Chevaliers, leads an insurrection against her. Despite Gaspard having won many battles in her name, he now believes Celene's leadership has grown too weak in the face of ever growing chaos.