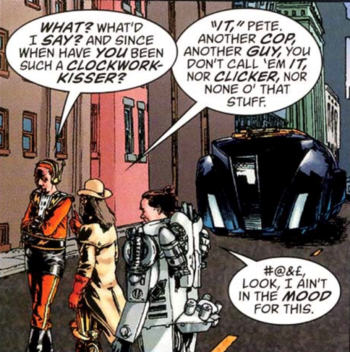 Haley: How can you be so smart sometimes and still be such an... an AIRHEAD!
Air Elemental: HEY! There's no need for racial slurs!
— The Order of the Stick
Advertisement:

In Real Life, any time one group of people has animosity for another, they'll come up with mocking or degrading terms for the targets of their disdain.

So it's no surprise that in fantasy conflicts, such as humans treating sentient robots as second-class citizens, Elves vs. Dwarves, Fur Against Fang, etc, many fantastic racists, classists, and the like have a wide vocabulary of fictional slurs to use against robots, vampires, etc. It can be very Does This Remind You of Anything? at times.

When this happens during times of war or other armed conflict, see Nicknaming the Enemy.

The Legend of Zelda:

Not exactly a racial slur, but MLP fanfiction often depicts the terms coltcuddler and fillyfooler, fanmade terms used in-universe to refer to gay males and lesbians, respectively, as homophobic slurs, or at least vulgar.

There also a never usually fully written out "Z-Word" used for zebras, serving as an exact equivalent to the n-word. It goes through several depictions, both serious and not-so-serious, and often tends to be spelled near-identically to its real-world counterpart, with the implication that it refers to to a zebra's zig-zagging stripes.