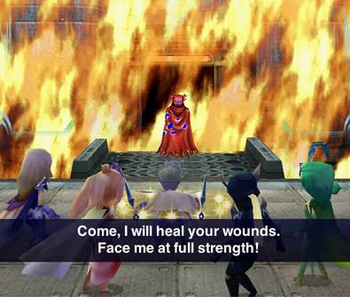 on the Knights of Takhisis
Advertisement:

Their goals are evil, but their means? Not so much.

A Noble Demon is a villainous character with a Code of Honour. They don't care that they have a bad image — they may even actively cultivate and embrace it. However, every so often a situation presents itself and they're just not willing to go the extra mile necessary to be completely evil. They'll topple your castle, but they'll do it right after everyone has cleared out first. They'll sacrifice whole armies to achieve their goal but they'll also sacrifice themself if they must. They'll conquer your village but they won't cause more destruction than necessary. They want to kill The Hero but they won't stab an enemy In the Back. Their ambition might be to Take Over the World, or merely to uphold the evil side of the Balance Between Good and Evil.

They might be obsessed with explaining this behavior so people won't think that they've gone soft. Killing enemies or servants who have failed but are loyal is "a waste of resources" and their inevitable newfound friends are "tactically advantageous allies."

A lot of this behavior is sometimes explained as the result of a complex they acquired when they felt weak and helpless, and if shown enough love, they may turn over a new leaf. Alternately, their nobility often gives them an opportunity to demonstrate Villainous Valour in the face of the hero's successes. And while Noble Demons are generally far from nice, being noble and powerful seems to imply they are above petty and malicious acts, or at least uninterested in them.

A Noble Demon who's a Proud Warrior Race Guy often comments that their enemies are (or have become) petty and cowardly and stain the name of their species. Likewise, when other villains show their true colors under pressure, the Noble Demon is likely to show Villainous Valour.

Often experiences Sympathy for the Devil from the heroes, and may perhaps show Sympathy for the Hero right back. If Eviler Than Thou comes up, the Noble Demon will likely be on the less evil end. May also be the "grayer" character in A Lighter Shade of Grey.

Compare the less villainous versions: Ascended Demon, Family-Values Villain, or Jerk with a Heart of Gold.

Whether Anti-Villain or Anti-Hero beneath the facade, expect a Noble Demon's motives to include getting plenty of Villain Cred.

See also Ambiguously Evil and Lawful Evil. Contrast with Card-Carrying Villain who doesn't deny they're evil but is much more willing to cross the Moral Event Horizon. Also contrast with Faux Affably Evil, whose kind acts only serve to benefit them (though milder examples of this may still qualify). Villains lacking this trait will usually be Always Chaotic Evil. Compare and contrast Nominal Hero, a character who does heroic deeds for all the wrong reasons.

Skurvy's Pirate Oath involves an addendum where he'll owe anybody who rids him of his toothache "on [his] honor." Whenever he says this, at least one person in the room lampshades how pirates don't have honor.

Skurvy's Pirate Oath involves an addendum where he'll owe anybody who rids him of his toothache "on [his] honor." Whenever he says this, at least one person in the room lampshades how pirates don't have honor.