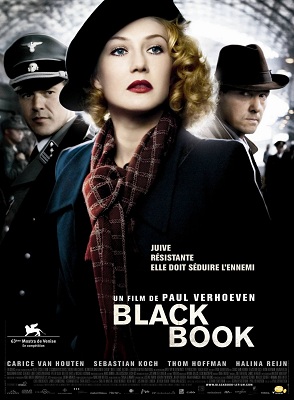 Black Book (Zwartboek in Dutch) is a 2006 Dutch film taking place in late 1944/early 1945, during the last months of the Occupation of The Netherlands by Nazi Germany.

It tells the story of Rachel Stein (Carice Van Houten), a Jewish woman who, after her hiding place is bombed and her family is killed after being ambushed when trying to reach liberated territory, becomes involved with the Hagueish resistance. She dyes her hair blonde, changes her name to Ellis de Vries and seduces Ludwig Müntze (Sebastian Koch), the Hauptsturmführer of the local Nazi security service, for spy purposes. This gets her an administrative job at the HQ, where she comes across the man responsible for killing her family.

Following this is romance, more escape attempts, deception and betrayal, continuing even after the Allied tanks are rolling in and liberating the country.

This was Paul Verhoeven's first Dutch film after more than twenty years of Hollywood. It's a Spiritual Antithesis of sorts to his earlier war film Soldier of Orange.

Not to be confused with Black Books.