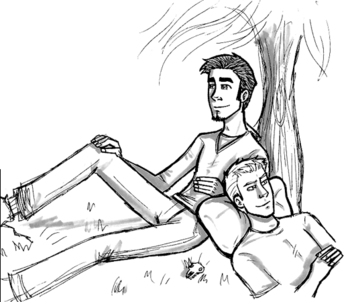 , by Stan Stanley (then going by Sandra Stanley), is the Spin-Off series of an earlier comic called Boy Meets Boy. It's one of those webcomics that's difficult to describe.
Advertisement:

On a basic level, it's the Slice of Life story of Fox Maharassa, an amiable, bisexual guy with a peculiar but loving family and some equally quirky friends. His best-friend-turned-boyfriend is Collin, a bitterly sarcastic preacher's son who's biding his time, waiting for an opportunity to conquer a small South American country (Venezuela, preferably). The pair are college students, and the plot is mainly concerned with their lives and personal growth. It also involves Anne (previously known only as Bootsie), a sweet girl Collin won as a servant/assistant in a poker game and who becomes a valuable friend.

Other important characters are:

Somehow, though, the story grows from this basic setup to involve demons, kidnapping plots, conspiracies and headwear that is far more sentient than it has any right to be. Strongly arc based, it's primarily a comedy, and usually provides a punch line - but depending on the arc in operation, angst and drama can easily work their way into the plot. The cast grows from the original group to include classmates, workmates, friends-of-friends and a few supernatural entities.

A warning: Friendly Hostility underwent a drastic Cerebus Syndrome Mood Whiplash at the end of 2008. The series moved from the lighthearted tale of a well-intentioned klutz and his Jerk with a Heart of Gold (well, sometimes) boyfriend to a considerably sadder, more realistic/ darker tale that features a level of miscommunication never seen in the comic before, hints of a Start of Darkness and does some serious Foreshadowing before it crashes into a Bittersweet Ending. Lovers of Happily Married couples and fairytale endings take note: stop reading before November 2008. Seriously, you'll thank us later.

Friendly Hostility ended in July 2009. It is currently replaced with the new comic, Other People's Business, which has already shaken the fanbase only a few weeks into its run. Because the thought of a world without Stan doing a webcomic is terrifying.

Because of the mood change and the epic nature of the final few arcs, tropes that refer solely to the ending are listed separately. Needless to say, beware of spoilers.

Tropes that refer only to story arcs from November 2008 onwards: