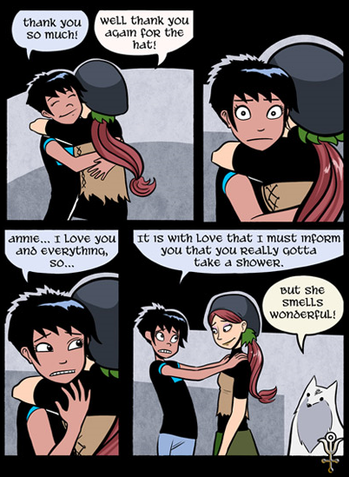 Two people hug, then one of the two makes a comment, almost always about the other person, who will probably answer in an embarrassed way. The comment generally revolves around the hugged person's smell or some other awkward body feature.

A possible ending joke to a Golden Moment. Expect it from Platonic Life-Partners or, in a more caustic tone, from Vitriolic Best Buds. If the comment is about the awkwardness of the hug itself, then it could involve Heterosexual Life-Partners who have been expressing more than their usual mutual affection... especially if someone invokes Or Are You Just Happy to See Me?