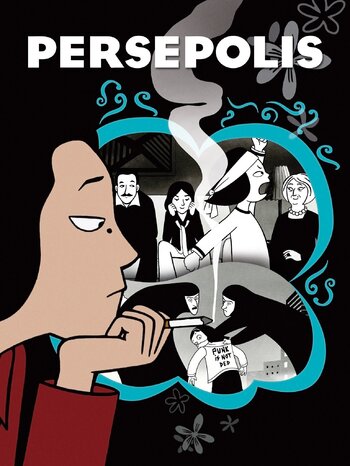 "One can forgive, but one should never forget."
Advertisement:

Persepolis is an autobiographical comic by Marjane Satrapi, originally published in multiple volumes from 2000–2004, and adapted into an animated film (directed by Satrapi as well) in 2007. It begins with her childhood in Tehran during The '70s, as her middle-class family works to bring down the Shah. Soon, the fundamentalists are swept into power, and a new wave of repression begins. Marjane rebels in small ways, such as by buying smuggled rock tapes and denim jackets, drawing the attention of the police and compelling her parents to send her to Europe. She kicks around Vienna for a few years, alienated by the people there, before returning to a Tehran changed by years of fundamentalist rule.

Both the graphic novel and the film were well received by critics upon their release. The film was nominated for the Best Animated Picture Oscar but lost to Ratatouille. The Iranian government issued protests against it being shown at various film festivals worldwide, but it allowed a limited screening in Tehran. The film was banned for a short period of time in Lebanon, as well.