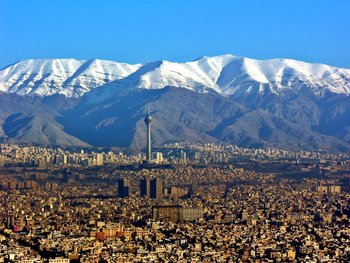 Skyline of Tehran with the Milad Tower and Alborz Mountains.
Advertisement:

Tehran (Persian: تهران) is the capital of Iran. With more than 8.6 million people residing within city limits, it is by far the most populous city in Iran; the second largest, Mashhad, has 3 million people. It is also the second most populous city proper (after Istanbul) and metropolitan area (after Cairo) in The Middle East. Located at the slope of the Alborz Mountains ("Tehran" literally means "bottom of the mountain slope" in Persian), it is the 32nd capital of Iran, being chosen as the capital in 1796 by Agha Mohammad Khan of the Qajar dynasty due to its proximity to The Caucasus and distance from the vying factions of the previously ruling Iranian dynasties.

During the pre-Islamic era, the area that would become Tehran was a hamlet on the outskirts of Rey (ancient name Rhages), a city some 20 km southeast that is now part of Tehran's metropolitan area. Rey had been an important city since the time of the Medes. Tehran remained an unimportant village for several centuries following the Arab conquest and only started to grow in prominence after the Mongol invasion. The Khwarezmians, who controlled the Iranian plateau, bore the brunt of Mongol devastation because it dared to defy Genghis Khan. Many of its cities, including Rey, were razed and following that the survivors of Rey's sacking fled to Tehran. During the early modern period, Tehran was a walled city and its population grew slowly; in the 1500s, it numbered less than 1,000 people, rising to some 15,000 around the time of its designation as the country's capital.

Much of the city was demolished, rebuilt and modernized under the rule of Reza Shah in the 1920s, and has since then become a flourishing metropolis and destination for mass migrations from all over Iran, with the city being listed under the top 10 fastest growing travel destinations in 2016. The city is home to the largest shopping mall in the world, the Iran Mall, which, while still partially under construction, had its first phase opened to the public in 2018, the largest stadium in Western Asia in the Azadi Stadium, and the sixth-largest tower in the world in the Milad Tower, in addition to various other historic and unique landmarks like the Azadi Tower and Golestan Palace, the latter of which is a UNESCO World Heritage Site.

Unfortunately, the city suffers heavily from pollution, being rated as one of the most polluted cities in the world. The majority of the pollution is air pollution from cars. Originally, Tehran was suppose to have a capacity of only 300,000 cars, but the number has far surpassed that, with more than five million cars now occupying the roads and more than 200,000 taxis roaming around daily. To help with the heavy flow of traffic throughout the city, a large series of expressways has been built around it. Another major issue is earthquakes, due to the city being located near two major fault lines. Because of these issues, there have been plans to relocate the capital to a different city, though no definitive plans have been approved yet.