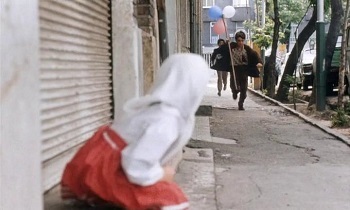 The White Balloon (Persian: بادکنک سفيد‎ Badkonake Sefid) is a 1995 Iranian children's film and the directorial debut of Jafar Panahi, who won the 18th Caméra d'Or/best feature debut at Cannes for this film. It was written by Panahi's mentor Abbas Kiarostami.
Advertisement:

The film is an uplifting story about a girl who wants to buy a pretty goldfish for the Iranian New Year, Nowruz. In the process, she has to go through difficulty after difficulty as everyone is simply too preoccupied for the festival's preparation.

Other than Cannes, the film is Iran's entry for Best Foreign Language Film in the 68th Academy Awards and made international news not because it won the award (it didn't) but because the jury refused to follow the Iranian government's attempt to withdraw it.