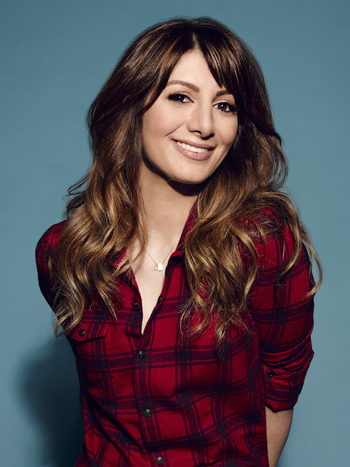 Pedrad is perhaps best known for starring on NBC's Saturday Night Live (becoming the show's first Iranian-American cast member, as well as the first — and, so far only — female Asian cast membernote technically she is, since Iran is part of Asia. So far, SNL hasn't had any East Asian female cast members, but that could change, since the show is still on the air and one in a handful of SNL cast members who weren't American- or Canadian-bornnote joining Tony Rosato [Italian-born, Canadian-raised], Pamela Stephenson [New Zealand-born, now an Australian citizen], Morwenna Banks [English-born and raised], Horatio Sanz [Chilean-born], Sasheer Zamata [born to African-American parents in Japan due to her father's job in the military], and Bowen Yang [born to Chinese immigrants in Australia]) as a featured/repertory player for five seasons (starting in the show's landmark 35th season, where she easily became a stand-out compared to Jenny Slate, whose vulgar verbal faux pas on her first sketch led to reduced appearances and her being let go), where she became known for her impersonations of celebrities like Arianna Huffington, Kim Kardashian, and Barbara Walters.

After her fifth season in 2014, Pedrad left SNL for the FOX sitcom Mulaney opposite John Mulaney, which was ultimately canceled after one season. Since then, she's appeared on New Girl and Scream Queens. As of 2016, she's developing a pilot for FOX that she'll also star in.