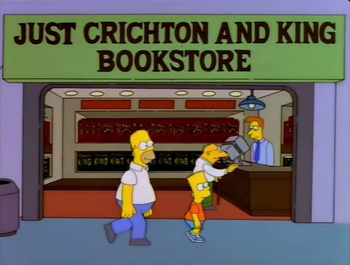 "Do you have anything by Robert Ludlum?"
"Get out!"
"It is a simple universal law [that] People always expect to use a holiday in the sun as an opportunity to read those books they've always meant to read, but an alchemical combination of sun, quartz crystals and coconut oil will somehow metamorphose any improving book into a rather thicker one with a name containing at least one Greek word or letter (The Gamma Imperative, The Delta Season, The Alpha Project and, in the more extreme cases, even The Mu Kau Pi Caper). Sometimes a hammer and sickle turn up on the cover. This is probably caused by sunspot activity, since they are invariably the wrong way round."
— Terry Pratchett, The Last Continent
Advertisement:

The junk food of the literature world: a lap-breaking paperback you buy cheaply at an airport bookshop to fill your time during a flight. Maybe you finish it in the hotel room; maybe you save it for the return trip. Either way, you know perfectly well that, as much of a page-turner it may be, you just bought it for the lack of anything else to do.

Usually light reading — the airport novel isn't something you seek out for profound thoughts, philosophical insight, or masterly writing; it's just something to take the boredom and discomfort of travel away for a few hours. It has to be engaging and exciting, though — a story that wades through 200 pages of Expospeak before getting to the good stuff isn't doing its job. Get to the action and romance, already.

It is usually a derogatory term — "Get your nose out of the airport novel and read something worthwhile!" — but Tropes Are Tools. You just need to keep your expectations in check. Done well, Airport Novels might be deliciously campy or even So Bad, It's Good. What were you going to spend that $6.99 on, anyway? Some people even actively seek them out as a literary equivalent to the Unabashed B-Movie Fan.

On the other hand, some decent authors write or have written Airport Novels, including the famous author Stephen King.

Airport Novels are a genre which is not defined so much by content, which encompass Clancy-style techno-thrillers, adventure books, Joan Collins-style romance novels, High Fantasy, and other light fare, but by social function. They are almost always Doorstoppers and often feature a contemptible cover. If not, expect a sequel that follows up some much more popular work like a leech; Pride and Prejudice sequels are popular, as are Biblical Fan Fiction.

These books are always of cheap manufacture, rarely designed to last more than one or two readings. Often seen as the Spiritual Successor to the Pulp Magazine. Compare Extruded Book Product.

Remember that just because you didn't buy it in an airport doesn't make it high-brow literature, and likewise, if you did buy a book at an airport that doesn't necessarily make it an airport novel; you can get the likes of American Gods in airport bookstores. Some modernized airports even offer full-featured bookstores with titles of just about every type and even the ability to "rent" a book - read it, return it when you come back (or to another location that has the same chain) and get something like half back what you paid.

Despite the fact that everyone who can afford a plane ticket can probably afford something you can read an eBook on, this is still some way from becoming a Dead Horse Trope. Paper books don't need batteries and some airlines still insist you turn off all electronic devices during takeoff and landing. Most of them can even be bought as eBooks.